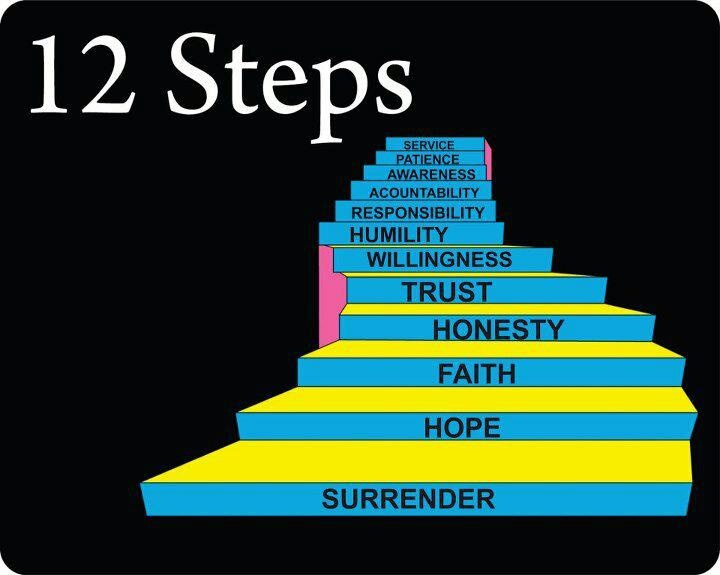 These notes are from recovery in AA and/or related 12 step programs.
Readers are encouraged to click external links for more detail.
We hope you find them helpful.
Love in fellowship.

Bill W. considered each step to be a spiritual principle in and of itself. The most important of these is Humility.

Core Spiritual Principles of the Program:  Willingness, Open-mindedness, Honesty AA’s
Code:  Love and Tolerance of Others

The relative success of the A.A. program seems to be due to the fact that an alcoholic who no longer drinks has an exceptional faculty for “reaching” and helping an uncontrolled drinker. The heart of the suggested program of personal recovery is contained in Twelve Steps describing the experience of the earliest members of the Society.

In simplest form, the AA program operates when a recovered alcoholic passes along the story of his or her own problem drinking, describes the sobriety he or she has found in AA, and invites the newcomer to join the informal Fellowship.

The Twelve-Step process gives meaning to our lives. In working the steps, we come to accept both the dark and the bright sides of ourselves. We gain humility and perspective.

In seeking to have our shortcomings removed, we develop a working appreciation of our own powerlessness and the strength provided by a Higher Power With our enhanced understanding of ourselves, we gain greater insight into and acceptance of others.
The Twelve Steps are the key to a process we call “life.”

Life is a process; the Twelve Steps are the key. Use the steps to participate in that process, understanding and enjoying recovery.  –Just For Today | More…

The five principles of the Twelve Step Program are; membership requirement, spiritual basis, personal inventory, restitution, and helping others.

The heart of the suggested program of personal recovery is contained in Twelve Steps describing the experience of the earliest members of the Society:

1, We admitted we were powerless over alcohol – that our lives had become unmanageable.

2, Came to believe that a Power greater than ourselves could restore us to sanity.

3, Made a decision to turn our will and our lives over to the care of God as we understood Him.

4, Made a searching and fearless moral inventory of ourselves.

5, Admitted to God, to ourselves and to another human being the exact nature of our wrongs.

6, Were entirely ready to have God remove all these defects of character.

7, Humbly asked Him to remove our shortcomings.

8, Made a list of all persons we had harmed, and became willing to make amends to them all.

9, Made direct amends to such people wherever possible, except when to do so would injure them or others.

10, Continued to take personal inventory and when we were wrong promptly admitted it.

11, Sought through prayer and meditation to improve our conscious contact with God as we understood Him, praying only for knowledge of His will for us and the power to carry that out.

12, Having had a spiritual awakening as the result of these steps, we tried to carry this message to alcoholics and to practice these principles in all our affairs.

Newcomers are not asked to accept or follow these Twelve Steps in their entirety if they feel unwilling or unable to do so. They will usually be asked to keep an open mind, to attend meetings at which recovered alcoholics describe their personal experiences in achieving sobriety, and to read AA literature describing and interpreting the AA program.

AA members will usually emphasize to newcomers that only problem drinkers themselves, individually, can determine whether or not they are in fact alcoholics. At the same time, it will be pointed out that all available medical testimony indicates that alcoholism is a progressive illness, that it cannot be cured in the ordinary sense of the term, but that it can be arrested through total abstinence from alcohol in any form. –Alcoholics Anonymous | More…

Waiting
Wanting
Wants
Watching
Welcoming
Wellness
What If?
Whiskey
Who Am I?
Why It Works
Will
Willlessness
Winners
Wisdom
Women
Working It
Worry
Worship
Worthiness
Wrongs

Yesterdays
You Can Do It